David McWilliams is an influential economist who’s made accurate forecasts around the world. He predicted the UK Brexit vote, the Trump victory, and the 2008 global crash. 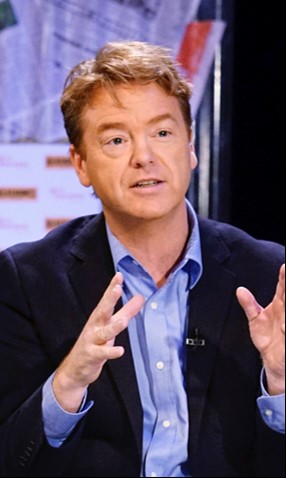 The global pandemic sparked another volatile economic period, and economist David McWilliams joined Manulife leaders for a digital conference in February 2022. McWilliams shared his insights on some of today’s biggest headlines.

Below is a summary of his forecasts on a potential economic recession, the great resignation, the housing bubble, China, and more.

It’s Not a Recession, it’s a Pand-ession

He said we chose to shut down the economy because of the pandemic. As a result, we are not experiencing a typical economic cycle of recession and recovery.

McWilliams explained that in a true recession, income and assets go down while unemployment rates rise. He says we’re seeing the opposite.

Other than industries shown vulnerable to the pandemic (tourism, hospitality, events, etc.), income rates have risen and with it, employment rates and asset prices, according to McWilliams.

We’ve been waiting for permission to go back out and play, he said, stockpiling savings this whole time.

McWilliams said we’re opening an economy that’s ready to go, so this recovery is going to be a different beast. The very language we use to describe it will have to change. He says, “It’s not a recession, it’s a pand-ession.”

The Impact of the Great Resignation

McWilliams said society changes when attitudes change in conjunction with technology. He said the pendulum of power is swinging from the corporation to the individual.

“It’s very clear to me that we’re moving from an era of the corporate person to an era of the sovereign person,” McWilliams said.

He said working in large companies is no longer the default after spending two years working from home and reaping the benefits of it. People are emboldened and demanding a new work model.

Corporations will have to reimagine the workplace, or they will lose their employees, McWilliams said. He said people have the power now, and the companies who offer a la carte options will win the talent.

Will the Housing Bubble Ever Pop?

He said it doesn’t behave the same way in a free market as other commodities. When prices of property go up, demand goes up — people panic buy — but the supply dwindles because owners would rather wait for those prices go even higher.

Governments, he said, need to step in and provide cheap, stable homes for people. McWilliams predicts that this will eventually be the norm and regarded the same way as public education — necessity over economics.

McWilliams said inflation rates are on the rise because of pandemic impacts on supply chains. He said lowering inflation would require an interest rate increases, but there are complications to that.

The world has changed politically, and the banking system is sitting on a mountain of debt that has made it fragile, McWilliams said.

“If the central banks act too quickly, we could have a serious reversal of asset prices,” he said. But McWilliams doesn’t think central banks will drastically increase interest rates.

He said the rich hang out with the rich, and they are not going to punish their friends by raising interest rates to lower inflation.

McWilliams predicts that China’s economic growth will follow a similar pattern to Japan. Japan was devastated in WWII but, by 1967, it had grown into the second largest economy.

He said this created mass panic of Japan taking over, but with their move from industry into finance, real estate, and insurance, we saw their growth decline because of overinvestment. “Then Japan goes through this period of 20-25 years of reflection, low growth, poor demographics,” McWilliams said.

McWilliams said China followed a similar growth arc in the last 30 years with the last phase being overinvestment in real estate and banking. “I would be very, very surprised if Chinese growth, not forever but for the next foreseeable future, gets above 2-3%,” he said.

McWilliams said this is complicated by bad demographics, a result of the one-child policy, and the changed perception of the Chinese Communist Party worldwide.

The opinions expressed in this post are those of David McWilliams and do not necessarily represent the views of Manulife. The information in this article is not to be relied upon as professional advice for specific situations.