For health and happiness: 7 tips to disconnect from your smartphone and devices

Remember the old, pre-smartphone days? Remember having to find a pay phone and making sure you had a quarter in your pocket to make the call? Or having to wait for the TV news to get the weather forecast? What about when the only way you could play a video game at home was to connect a giant console to your TV? And then there was making a trip to the bank to pay bills. Remember when the only way to contact your favourite pop star was to write a letter, fold it up, put it into an envelope, buy a stamp, put it in the mail, then wait months for any kind of acknowledgement? Waiting in line for concert tickets is a task we’d like to forget. And having to buy an expensive camera to take high-quality photographs was no fun, either. Remember having to go to the library to find an atlas when you wanted to see a map of Hawaii? And making trips to the video store to rent your favourite movie?

These days, you can do all of those things and more with a few clicks of the thumb. It’s kind of hard to remember those pre-smartphone days at this point. Smartphones have become such an essential part of our lives that we spend, on average, four hours a day staring at those little touch screens [Source: CTVNews]. Having that much computing power in such a small package is such a miracle of modern science, and there’s no doubt that they’ve made so many parts of our lives much more convenient.

But do we really need to spend four hours a day on them? And that’s just an average. Some people spend even more time than that. Consider people who commute on public transit and spend two to three hours per day on their phones while on trains or busses. That’s a lot of time on its own, but then they look at it at breakfast for a bit, then at lunch, maybe a little bathroom screen time (let’s not kid ourselves, we all do it), then another hour before bed. It really adds up.

Sometimes it seems like we’ve had smartphones forever, but while the iPhone® has only been around since 2007, it really helped revolutionize and popularize those little miracles [Source: Vox.com]. The iPhone is just barely a teenager. Meanwhile, the first smartphone was unveiled back in 1992: IBM’s Simon Personal Communicator. That makes it a full-on Millennial. It had a touchscreen, an address book, and a calendar. You could send emails and faxes, and you could even sketch on it with a stylus. But it would’ve been tough to spend four hours a day on the Simon even if you wanted to, with its one-hour battery life [Source: Sciencenod].

Is it possible, though, that that one-hour battery life might be better for us? Is it possible that smartphones can actually have adverse effects on our wellbeing? And we’re not just talking about walking into a car door while checking the ‘gram.

Why can’t you put your smartphone down?

Smartphones are addictive. That seems fairly obvious, even without looking at studies and hard evidence. When you aren’t staring at your phone, take a look around and you’re sure to find many other people who are. But there’s also legitimate science [Source: Harvard University] behind this.

Many of the apps on your smartphone are intentionally designed to be addictive. They’re programmed to trigger a dopamine release. Dopamine is a pleasure chemical. It’s produced by our brains and releases when we have pleasurable experiences, including when we connect with people. Dopamine rewards us and motivates us to want to enjoy those experiences over and over again to once again earn that dopamine reward. That compulsion is an addiction.

Many apps directly target this dopamine release by rewarding you with likes, favourites and notifications. When many people start to feel bored, they’ll pick up their phone, consciously or subconsciously hoping for that dopamine hit provided by those social connections and notifications. And when we don’t get it, the anticipation only builds for when it finally comes.

But dopamine isn’t the only potentially damaging thing darting around in your body thanks to your smartphone. There’s also the stress factor caused by the release of the hormone cortisol, which can do physical damage to your body [Source: Royal Australian College of General Practitioners]. Cortisol exists to help us when we feel threatened, and it causes increased blood pressure and heart rate. But it can also be released when we feel emotionally stressed – and we all know smartphones can cause emotional stress. Just think of all the anxiety your smartphone can cause:

As Dr. Robert Lustig of the University of California, San Francisco, says, “Every chronic disease we know of is exacerbated by stress.” We’re talking about heart attack, stroke, dementia, high blood pressure, infertility, depression and more – all can be made worse by stress.

Smartphone use can cause aches, pains and twitches, too [Source: Huffpost]

We’re even at the point where, in some cases, smartphones are triggering our brains to feel things that aren’t really happening. These are called “phantom” buzzes, where you think you’re feeling a smartphone notification vibration, when you never actually received such a notification.

There are real physical effects of smartphone overuse, too. There are repetitive strain injuries like “text neck,” “text claw,” and “cell phone elbow.” And you can even have twice the risk for brain cancer when you stare at your phone for half an hour a day over 10 years.

How to use your smartphone less

So, what can we do to counteract the nasty effects of smartphone overuse? The obvious answer is to disconnect from your phone at least a little bit. Don’t give in to that constant temptation, that fear of missing out. After all, if you miss out on the next hot meme or Aunt Sally’s latest post about her cat, what are you really missing?

Here are some ways to ease into your smartphone disconnect and make it stick:

We’re not suggesting you trash your smartphone entirely. Like we said, they’re little miracles that make so many aspects of modern life more convenient and just plain fun. But, like any kind of potentially addictive activity, from gambling to shopping, it’s best done in moderation or in limited doses. The best advice is to not only limit your time on your smartphone, but take that extra time and do something healthy and active. Get out of that virtual world and into a more active real world. 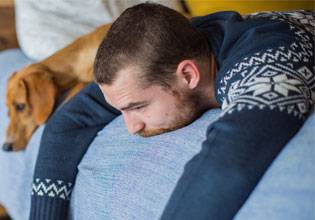 Losing touch: coping with the effects of virtual communication

According to MindBeacon social isolation can take a toll on us both mentally and physically.

MindBeacon recommends these tips to keep your sleep on track.

How to start a new exercise routine

The benefits to your mental health are just as important as the physical ones, particularly if you’re in isolation or under a lot of stress.